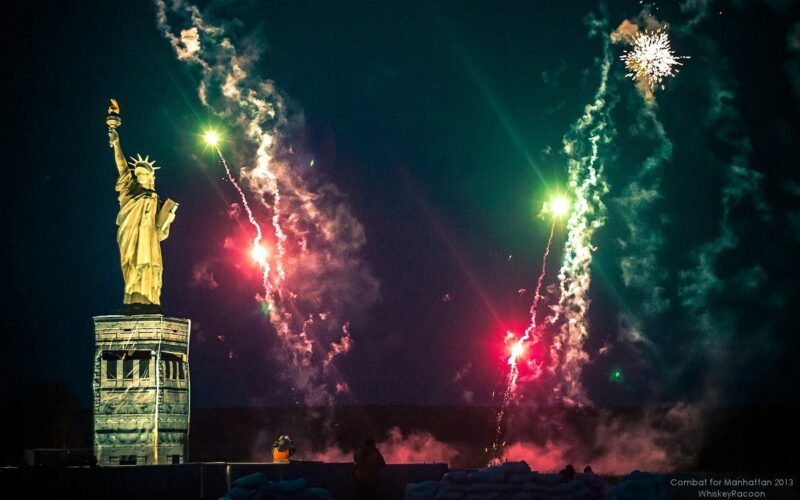 On the 6th of September, in Ural region, not far from Atig village ( 80 km from Yekaterinburg) in Russia a big airsoft game «The Fight for Manhattan» took place. The organizers of this game became the group «Combat». The preparations for the game had been lasting for almost one year and it was worth that. Specially for this game the tank Abrams M1A1 was built, as well as Hummer, BTR 80 and even the Statue of Liberty.

Like it was written in the scenario there were two sides of the fight: the Soviet Union and the United States army. Like it was planned, the Soviet army attacked Manhattan and the American army held the line. The game started with explosions, undermining cars, destroying tanks and fireworks. For all night there were exciting fights that calmed down only in the morning for just a short break.

After about 12 pm participants rushed into the fight again. This time they used armored vehicles with a laser-tag system and did other not less interesting activities. In the end of the game the fighters formed a line and were given medals to remember the event.

It is necessary to say that the organizers of the game » The fight for Manhattan» had invited foreign gamers from the US, the UK and other countries, which were offered  free transfer from the airport to the game field and even strikeball weapon for the game time to use, but unfortunately none of them came. One famous team Green Mountain Rangers were invited personally but also did not come.

Next year it is planned to continue the series of games, where all gamers from all over the world wishing fight back the Soviet Union are invited.

To get the latest news, join us on Facebook